Teaching first grade at the Waldorf school, I visited with dragons and elves, fairies, giants, gnomes, and all the mythical creatures that our ancestors in the very early days described in stories they told one another.

The Waldorf curriculum framework was designed to support children as they retrace the human journey into literacy. Fairy tales, old old stories that predate writing, are the stories of choice in first grade academic classes.

As the teacher, it was my role to choose which fairy tales to tell, and that meant finding the stories appropriate to each group of children I taught, learning the stories by heart, telling them to the children, and then, in some cases, drawing blackboard pictures to suggest a magical world to my students, in my real life classroom.

Lessons were built around these stories, and in doing their school work the students stepped through the golden door to literacy, in number, word, and idea.

That meant of course that I had to explore the literature of fairy tales. I borrowed books from the library and scoured second hand book stores, building my own book collection so that I had at hand during the school year lots and lots of stories from which to select.

It was a delightful assignment.

These stories of course originated before books, and the illustrations were before books, as well. Before they were put on paper, or drawn on rock or stone, the first fairy tale pictures emerged in words as the story was told. They were visualized by each individual who heard and was touched by the tale, and so they fed the soul.

The development of writing in human history led to the beginning of books, written out by hand with hand drawn decorations. The reader could still picture personal images to accompany the story, and now they had as well a visual interpretation from someone else, the illustrator.

Fairy tales, collected from the oral tradition by writers and historians, were written down. And as the development of books led to the printing press, fairy tales found their way to print. They were often accompanied by illustrations reproduced with woodblock and later metal engraving and etching. 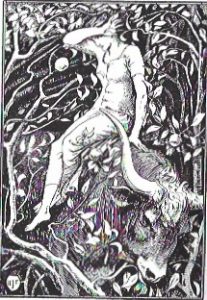 Those single color line illustrations were reproduced in modern black and white in many of the fairy tale collections I perused, and I copied some of the illustrations in chalk for my blackboard drawings at school.

I particularly liked the Red Fairy Book edited by Andrew Lang, and I often found stories there that fit my class. I told the story of Kari Woodengown and put on the board a drawing taken from an illustration by H.J.Ford (Dover publications, The Red Fairybook, illustrators H.J.Ford and Lancelot Speed).

I was so glad that those drawings had been published, because the creative task of illustration extends beyond mere graphic execution, and I was able to reproduce rather than invent much of what I drew to illustrate lessons at school.

Fairy tale publishers through the years called on artists who had developed artistic reputations. Gustave Dore, Walter Crane, Arthur Rackham, Maxfield Parrish and others established a high standard in book illustration. As people write new stories and as we continue to enjoy and republish the old stories, modern artists take their turn at portraying the often supernatural creatures who make the fairy stories so much fun.

When former Waldorf teacher Leni Covington began her fairy tale project, The Shoemaker and the Elves, published by Kenyon Avenue Press this year, she called on an artist friend Taylor B. Randolph, to collaborate. Taylor Randolph’s elves danced about in promotional announcements of the new book, and I was eager to meet the artist whose illustrations clearly captured the friendly good spirit of the Shoemaker tale, continuing in the tradition of early book illustrators.

Born in southern Virginia, Taylor Randolph attended Salem College in North Carolina, where she considered a biology major before shifting her course to a degree in art. Further study in the arts took from the southern United States to Europe.

In Europe, Taylor Randolph met her husband, and returning to the states, the two moved to Louisiana. Their family life included a stint at the Red Cloud Reservation in the Dakotas, where they both taught school. Her husband, who is an engineer, taught science, and she taught art, and she continued teaching when they moved to Charlottesville, Virgina, substituting as an art teacher in local schools and keeping her own artistic practice alive at home.

Though she has traveled the world, Taylor Randolph is in Virginia now. When I stopped by her house to pick up a copy of the newly released fairy tale, I mentioned that I liked her drawings, and she made mention of German artists. I wanted to hear more, and she agreed to meet me at the Mud House on Charlottesville’s downtown mall, a perfect setting for coffee and conversation in the open air.

With the light of an artist in her eye, Taylor Randolph told me that as an American college student she participated in a study abroad program in Italy. She still recalls with visible pleasure the feeling she experienced seeing in person the Italian art she had studied as reproductions in school, saying, ”It was a real rush just to stand in that space.”

But her illustration work, she told me, didn’t develop until after she left Italy for Germany, where she supported herself doing layout work for magazine advertising.

Living in the city of Heidelberg, she approached a publishing house that specialized in medical illustration. “I didn’t have a portfolio,” she said, speaking of the collection of work that an artist usually presents when seeking employment. “I showed them my travel diary.” And they clearly saw promise, giving her an entry level position that included on the job training in the illustration techniques of their publication house.

“Basically, I did an apprenticeship,” she remembers, moving step by step, drawing with pen and diluted wash for the medical books, employing water color in books aimed more at the lay person market. With her interest in both biology and art, the world of medical illustration suited her well, and she honed her artistic technique on the job. When she returned to the United States, she continued to paint. “I did illustration for medical doctors here,” she said, and in her home studio worked in watercolor and oil, exploring other aspects of artistic expression.

When Leni Covington began her project retelling the story first presented by the Grimm brothers, Jacob and Wilhelm, she knew she wanted an illustrator and approached her friend and colleague Taylor Randolph.

“Leni’s the one who came to me,” Taylor said of the collaboration. “She had the project in mind, and she told me, ’This is not going to go fast,’ and it didn’t.”

With no publication deadlines in place, Covington worked on the story, Randolph drafted the pictures, and their discussions included visualization of the illustrations and the relation of the pictures to the text.

“She’s a Waldorf teacher,” Taylor said, “and I knew I would be way too literal. I told her, tell me anything you want changed.” Neither woman had particular connections in the book industry or to modern printing specifications, but they shared a feeling for the story and the impression they hoped to achieve.

The illustrations Taylor Randolph contributed to Leni Covington’s fairy tale project were painted in watercolor, and the author and artist maintained close contact, deciding together how the story’s characters should appear as they worked together to bring the old story to life in the modern world.

Work continued sporadically for quite some time, giving way to other life events, including visits to out of town family, but the women continued to develop their ideas.

“Finally, last fall,” Taylor said, “Leni told me all right. I’m on it.” And The Elves and the Shoemaker moved to the top of the list.

Covington had found a mentor in the printing industry, and the book the author and illustrator had imagined changed format. Pictures were digitalized and enlarged, and colors changed. “The reds and greens” Taylor explained,”were some of the more difficult colors, and the yellows — they didn’t print like the originals.”

Now with one book in the world, having experienced the journey of idea to printed page, Covington and Randolph have begun thinking of the next project. While pleased with their first publication, they plan to exert more editorial control on the next project, a fairy tale that Covington has chosen from the Spanish tradition. While Leni Covington works on the text, Taylor Randolph is beginning to plan the paintings that will illustrate the next collaboration at Kenyon Avenue Press.

Roll back the tape: 1960, Cincinnati, Ohio, 3 am. My upstairs bedroom.  Headphones on, I’m squinting in the dark at the lighted dial of my Hallicrafter S-38e short wave radio, with a Q-multiplier attached that I built from a Heathkit. The S-38e was produced from 1957 to 1961, making it the end of the Hallicrafters S-38 line of shortwave… END_OF_DOCUMENT_TOKEN_TO_BE_REPLACED

I climbed down out of the Crow’s Nest and spent a recent Saturday afternoon worrying a pile of knotty red oak rounds with a maul and wedge, whittling them down to size for the wood stove. As I split them open, I enjoyed seeing the beautiful swirling grains in the wood, exposed to the sunlight… END_OF_DOCUMENT_TOKEN_TO_BE_REPLACED