You are here: Home / Beyond the Back Forty / From An Educator’s Notebook 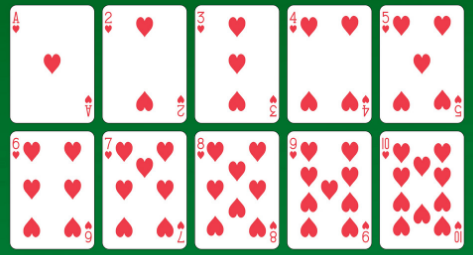 TEN   —   Playing to improve confidence and familiarity with number facts.

In arithmetic, complete familiarity and accuracy with basic number facts is important, so as an early grades teacher I played number games with students whenever there was a spare moment. The children studied number relationships while they had fun with each other, and numbers appeared all day long, in so many friendly ways relevant to our activities.

One of my more formal tools was the game of TEN, developed years ago when I was in Arizona and my class was in the fractious fourth grade year. I needed group activities to help develop social skills while we practiced academic skills, and I designed as many lessons as possible to include some kind of good-humored student interaction. TEN grew out of that time, a card game designed for students to practice with number facts. The game requires independent calculation, but camaraderie permeates the atmosphere because the more people there are finding correct answers in the game, the better the score of the group, and that is the score that is kept.

TEN is a sit down game that successfully filled a math skills class time, and it was also fun to play when a half hour of social time appeared in the class day when directed activities were appropriate. It is also a good game to play after school, because any number really can play, although score keeping without a blackboard? I don’t know.

TEN is a number game with playing cards, and however math-timid students may be, I found that all my students responded enthusiastically to the game. They relaxed, laughed, concentrated and thought about number facts, and I was able to use the game successfully in second, third, fourth and fifth grade classes. Truly, the game can grow as complex as the math skills of the group playing will allow. Group games help students learn about themselves and about others, and that learning strengthens the social foundation that supports classroom success. Playing with numbers strengthens number skills, playing with each other strengthens social skills.

From the third grade in Tucson where students and I started developing the game through the years and across the continent to Virginia where my eight and nine year old children expressed enthusiasm for games of TEN, I kept expanding the arithmetic to make it an ever more challenging game. The rules don’t change, but they grow to involve ever more complicated calculating and record keeping.

The game’s attraction is that it is a game, to be played, and it is fun. We play it at school because it offers practice and develops skill managing arithmetic facts in a way that is enjoyable and thought provoking. We play it at home for the same reasons.

The game requires conventional playing cards with the face cards set aside, leaving cards Ace through ten in four suits.  Each hand requires six cards per player, so if many people want to play, many decks are required.  The full instructions are available as a download at the Living Traditional Arts Shop.  http://livingtraditionalarts.com/shop

Roll back the tape: 1960, Cincinnati, Ohio, 3 am. My upstairs bedroom.  Headphones on, I’m squinting in the dark at the lighted dial of my Hallicrafter S-38e short wave radio, with a Q-multiplier attached that I built from a Heathkit. The S-38e was produced from 1957 to 1961, making it the end of the Hallicrafters S-38 line of shortwave… END_OF_DOCUMENT_TOKEN_TO_BE_REPLACED

I climbed down out of the Crow’s Nest and spent a recent Saturday afternoon worrying a pile of knotty red oak rounds with a maul and wedge, whittling them down to size for the wood stove. As I split them open, I enjoyed seeing the beautiful swirling grains in the wood, exposed to the sunlight… END_OF_DOCUMENT_TOKEN_TO_BE_REPLACED