You are here: Home / Articles / Art / Dora’s Story, Rehab in the Desert

It was very good luck that led us to the J-Six Equestrian Center last spring. Thinking my husband and I were permanently moving from the southwest, I was looking for short term boarding for our two horses, out of the heat of Tucson and accessible to long distance truckers.

I visited J-Six Equestrian Center, a desert boarding facility right along I-10, the east–west interstate across southern Arizona,  and realized immediately I had found a special place and a safe place for our animals. What I didn’t realize was that the horsewoman in charge of the barn was an excellent teacher recognized for both her work with riders and her training of their mounts. And though I saw “Rehab” along with “Boarding” in the barn literature, I had no idea that I’d be back in Arizona with time to learn for myself how much it is that Katherine Calkins offers the equine world, or that she would apply her thoughtful rehabilitation abilities to the saving of our horse.

The J-Six facility, a 13 acre complex just west of Benson, Arizona, is located not far from the J-Six Ranch Road, in a neighborhood of large acreage development homes and open spaces still associated with the cattle ranching that brought settlers to Arizona over one hundred years ago.

Five years ago when Katherine Calkins and her team moved to J-Six, they found stalls, paddock and arena fences, and the necessary support buildings all in place.

Through the years, they have reconfigured fences and improved footing, and they have built a clientele who recognize that Katherine Calkins lives up to her business name, Wicked Good Horsemanship. Her animal care, rehab program and training of horse and rider are based on sound science, strong heart, and solid equitation. But I didn’t know that last summer. I knew that I was busy in Wisconsin, and I knew that Dora was in a stall in Arizona. Had rest helped her heal? It seemed that it was important to get her moving, to give her something to do, so I called Katherine to see if she could put some time into our horse.

“Dora is lame, you know,” I said. “ Do you have time to ride her, see what you think?” And Katherine said yes, she had time and would take a look. 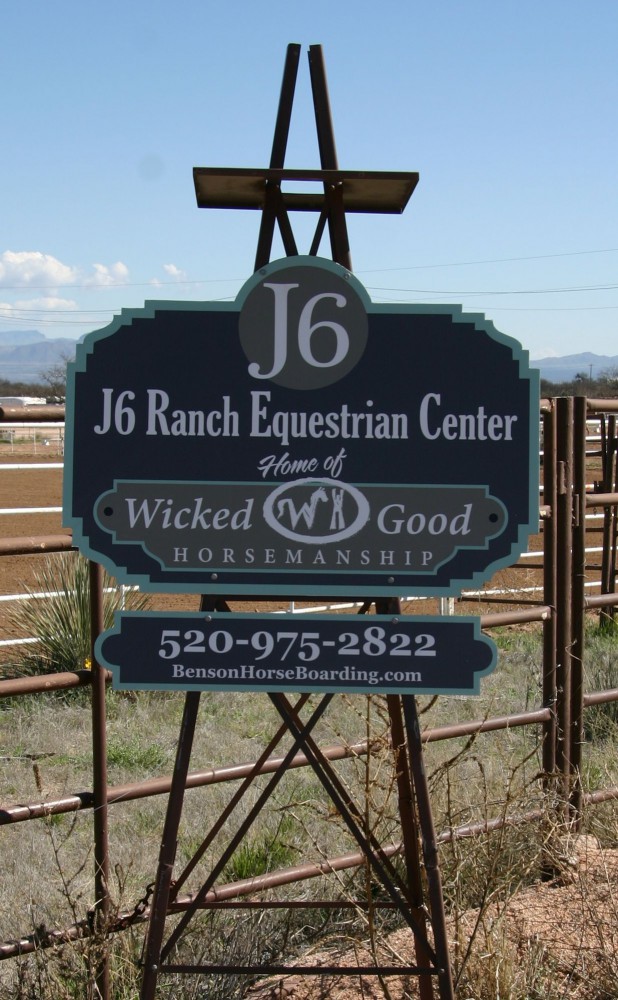 That was the beginning of Dora’s movement through the difficulties she developed after a hock injury.   Dora the gimpy Morgan is again becoming a graceful and confident mare, and the change is coming more quickly, smoothly and artistically than I would have thought possible. I always had high hopes, and now this horse, in the rehab program at Wicked Good Horsemanship, again has me fantasizing magical rides.

From the Midwest during the summer, I called Katherine occasionally to check in. She had started working with Dora, and I wondered what she was discovering about the mare’s condition. Katherine said yes, there was a little lameness, but everything was okay. That was good news.

It was only when I got back to the southwest and began frequenting J-Six myself that I began hearing references to the severity of the challenges that faced our mare and her body, observed by Katherine and her mother Martha Calkins as they watched Dora move.

“For a time,” Katherine told me recently, “I really wondered if Dora had a chance.  Some people would have looked at the way that horse moved and said no, put her down.”

Our beautiful Morgan mare with her strong kind character did not know how to use her body. I had seen it develop, watched as she was hurting and did not want to use her right leg. Although we did our best to allow her time and space for exercise, I feel certain that her undeveloped muscle in some way made possible whatever knock or twist it was that injured her leg.

Working in elementary education in Waldorf schools, I am frequently consulting with colleagues about the children in our care, and often our discussions focus on a child’s spatial awareness and sense of body geography.

With children, indications of the child’s sense of his/her own body can be seen in artwork as well as in the whole body movement patterns of the child.  Connections to the physical body affect the emotional and intellectual life as well as the ability to move successfully in the environment, and so as teachers we are eager to see children develop rhythm, balance, and free movement in all directions. The intellectual, physical and emotional aspects of the student improve the more the whole body can work harmoniously and independent of restricting reflexes.

With the horse, what I saw was that our mare had lost the rhythm of her natural movement and had become clumsy. She moved slowly, or in pounding patterns that showed simply determination to move, not harmony in movement.

I also saw a withdrawal of Dora from her natural wholehearted interest in the world. Something slight was missing from her eye, and while she was still an obedient mare, she seemed to be somehow lessened, no longer whole. Sometimes she wouldn’t even bother to look up, much less move, when we called her in.

Her spatial awareness, as we would say at school, did not reach to her legs, and her sense of body geography was poor.  She didn’t seem to enjoy moving.

Striking are the similarities between children and horses.

But what were this mare’s possibilities? Could she be sound?

“The question becomes,” Katherine suggests, “what is the definition of soundness?”

There is a difference, she points out, between two different aspects of soundness, the medical assessment and the performance assessment. Yes, Dora had a confirmed hock injury, but could she be helped to move freely again?

In her love of horses, Katherine is particularly enthusiastic in her interest in equine rehabilitation. The foundational inspiration for her work came observing a human, a relative who suffered from a shoulder injury that was cured with attention to muscle rehabilitation. If the muscles can be strengthened and stimulated to do their work properly, Katherine learned, the joints, unless otherwise compromised, can move freely without pain.

And what is a horse but a beautiful skeleton …

When an injury or traumatic experience result in compromised movement, a trainer’s  understanding of the complex systems of bone, tendon and muscle that regulate movement can help lead to healing exercises.  Rehabilitation of an injured horse requires a practitioner with keen interest in the mind and movement of the horse, and a disciplined approach to the sequence of therapies required to lead the horse to health.  The rehabilitation program at the J-Six Ranch Equestrian Center has its firm foundation in the keen interest Katherine Calkins has in the challenges of rehabilitation.

While I was in Wisconsin helping Diego become a northern horse, Katherine in Arizona was applying her well-trained observational skills to Dora, assessing the possibilities. Working with her on the ground and under saddle, Katherine began to develop a therapeutic approach.

“It took about a week for me to really decide that Dora was in fact fixable,” she said.

Indications of possibility lay in the fact that Dora did not consistently show discomfort in her hock. Her stride was stiff, but she did not always limp, and Katherine could see that looseness in her stifle joint led to an occasional misstep that put undue pressure on the injured hock.

The footfall wasn’t consistently wrong, nor were her gaits consistent. Dora, disrupted from front to back and sometimes gimpy at the trot, also demonstrated an awkward connection to her canter. Moving in freedom, she was jerky. Sometimes she’d start off with both hind legs together, her choppy bunny hop; sometimes she’d start off with a cross canter, the front and back out of sync; and sometimes she would simply start out on the wrong lead.  She usually had to move a few strides to work into a correct canter.

Dora didn’t seem to have a sense of spatial awareness, as though the injury had disrupted her connection to her hind feet. She could step over a ground pole with her front feet, but often knocked into it with her hind. She was losing confidence in movement, and being a proud mare, she began to avoid stepping over things when at all possible.

It was in going over poles, in fact, that Dora first showed some interest in jumping. Faced with a set of trot poles and no way around, she often jumped the lot, rather than step over them one by one, and sometimes her jump overextended the poles by a good foot or more.

The J-Six rehabilitation program includes stretching, massage, and microcurrent therapy. Working with massage, the trainer can feel and release places of tension and discomfort in the muscle system of this animal that was designed, above all things, to move beautifully.

With stretching exercises, the trainer not only supplements massage with further release of tension in the muscle groups, she also reacquaints the horse with healthy movement in extension and release.

Using the technology of microcurrent therapy, the trainer uses an electric device that stimulates the body with a slight current. Practitioners in this therapy, for humans as well as horses, note that pain reduction, lessening of inflammation, and an increase in functional ability of the body result from this energetic stimulation of the body at the cellular level.

Katherine Calkins used all these approaches with Dora, and at the same time she was designing movement exercises to strengthen muscle in the mare.

“Her back had shut down completely,” Katherine commented, explaining that the lower back is in close and constant contact with the joints and musculature of the hind legs, and difficulties in the legs make an immediate impact on the back.

After a week of analytic groundwork and riding, Katherine started Dora in ground pole training, adjusting the set up over time to make it more complicated and challenging. At the start, a single pole was challenging, and it really was the will power of the trainer that convinced Dora to move confidently, finally, over one and then a series of ground poles set in her track.

“In duration and difficulty,” Katherine said, “give and take.”

In the work over poles, Dora was forced to lift and bend her stifle and hock, and in this, practice using her joints, she strengthened her lower back.

“She needed to fix her back,” Katherine said. “We fix parts in sequence, and then ratchet it up so that the horse is more fit everywhere.”

At the same time, Katherine was supporting the mental health of her charge. Including trail rides in the training schedule gave Dora work on the mild incline of ups and downs  at J-Six , in the large arena, the driveway, and on the trail through the wash across the road. Getting out on the trail helped revive Dora’s interest in moving out to explore the world. She was learning to trust her own movement body at the same time that she was learning to trust the new relationship of working horse and rider.

Roll back the tape: 1960, Cincinnati, Ohio, 3 am. My upstairs bedroom.  Headphones on, I’m squinting in the dark at the lighted dial of my Hallicrafter S-38e short wave radio, with a Q-multiplier attached that I built from a Heathkit. The S-38e was produced from 1957 to 1961, making it the end of the Hallicrafters S-38 line of shortwave… END_OF_DOCUMENT_TOKEN_TO_BE_REPLACED

I climbed down out of the Crow’s Nest and spent a recent Saturday afternoon worrying a pile of knotty red oak rounds with a maul and wedge, whittling them down to size for the wood stove. As I split them open, I enjoyed seeing the beautiful swirling grains in the wood, exposed to the sunlight… END_OF_DOCUMENT_TOKEN_TO_BE_REPLACED