You are here: Home / Beyond the Back Forty / Keeping Horses

Wandering Waldorf teachers, Michael and I landed in Tucson, Arizona, and I found myself for the first time in my adult life completely horseless. That wouldn’t do. I started scouting out horse people, looking for a horse to ride.

Horses and their barn facilities surround and interpenetrate the city of Tucson, and I enjoyed interesting rides on the east side, the west side, the north side, and north central and still didn’t find anyone giving lessons that suited me. I couldn’t see anything to do but get myself a horse.

I enjoy watching all kinds of horses, but when it comes to bringing one home, I prefer the Morgan horse.

On the website of an Arizona Morgan breeder, I came across pictures of a very handsome stallion, and as I looked further on that site a chestnut colt caught my eye. He looked right at me on the screen, through the camera, perky but not bold. He was very good looking, and I found myself returning time and time again to that site, just to admire the handsome animal.

Never buy a horse off the internet, everyone told me, and I agree, more or less. But I figured, a baby. What could go wrong with that? I checked out the bloodlines; western working Morgan. Ah, good strong stock.

I like to think that if I raise animals from a young age, all the mistakes in upbringing will be mine. I won’t have to guess where their habits came from if I watch them grow and pay attention to the experiences they have.  I began to fantasize about buying the chestnut colt.

It got so bad that finally I bought him. I talked with the breeder on the phone, I arranged for a stranger to drive to the ranch to pick up the colt for me, and I accepted the offer of enabling friends who had an arena and horse paddocks as part of their Tucson homeplace and offered a real good deal on horse boarding.

But the truth of the matter is that I have always been partial to bay horses. There is something about the deep red coloring with black points that always pleases me, and I happen to know that Morgan bays are always super horses.

So I talked with the breeder again, and asked, how about that little bay filly, too? The one with the star.

The price was right. Pretty soon my story was, I bought two Morgan horses as youngsters, a brother and sister, from a dealer on line who caught me with photos of a handsome stallion and his family of offspring, all for sale.

We named the gelding Diego, in honor of his southwestern heritage and his charming good looks. His younger sister, the bay, was harder to name. She had a touch of elegance, and yet seemed very pragmatic about her change of conditions and her responsibility to family.  She put me in mind of my grandmother, a country woman and an artist, and so we named the filly Dora.

She got off the trailer a pretty little thing.  And she followed her brother around for a few days while we let them settle in. 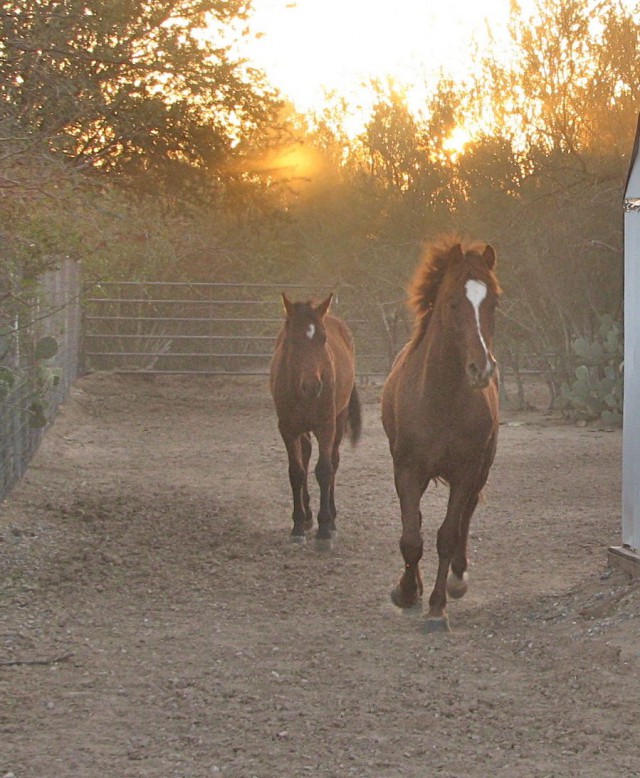 Her first weeks were basic. She met a halter for the first time, learned to wear it, respect the rope, stand tied, lift her feet when asked, and eat treats. Treats were surprisingly challenging. Neither of our new youngsters showed interest in anything but hay. Being culinary explorers ourselves, we kept offering different things to eat, and after a few days Dora tentatively accepted grain.  She took to carrots, eventually. But that was about it. Even carrot tops were too exotic for this ranch bred filly, and so she continued growing on her basic diet of Burmuda grass and alfalfa hay.

We learned that there are very few places in Tucson that include turn out in boarding agreements.  The horses primarily stand in stalls, and we were diligent in visiting our horses to get them out and give them time to roam around the available turnout spaces.  Dora and Diego got one summer out of town running more freely  on a friend’s ranch, and I started looking for opportunities to get the horses out of town.

Dora’s first years with us were spent learning basic manners and exercising her growing body as well as she could in her urban boarding situation. I worried that she lacked muscle but had no concern at all about her temperament or her good looks.

We exercised with our horses, glad for the break in the routine of our school days.  Dora learned some horse routines in the round pen and  agreed to travel circles on a longe line. We went for exploratory walks side by side, and we continued to put her out with her brother to play.

I still worried about muscle development in my urban horses, but I was completely delighted with the personalities they were developing. They charmed everyone who met them.

In the fall of 2013, Dora was almost five years old, and I started riding her.  I thought we were embarking on a grand new adventure that would develop Dora’s destiny as a super saddle horse. I had many imaginations in mind of just how that could look. She is my poster horse, and I anticipated great rides.

One thing I did not consider, however,  was the reality that came to us when I realized on my fourth ride that Dora was lame. It was slight, a little favoring of the right rear leg. I decided to let her rest, and the riding program stopped.

We  kept working with her, however, and she kept proving herself to be a willing and kind horse, learning more about manners,  walking around the boarding facility with us in search of interesting things to encounter.

Longing and round pen work aggravated the lameness and so were dropped from the schedule. Dora was let out only into rectangular exercise arenas, sometimes alone, sometimes with her brother. She favored her right leg, and at extreme times didn’t use it at all, trying unsuccessfully to trot on three legs, settling reluctantly into a walk, often   letting Diego run on ahead.

She didn’t always walk. Sometimes she would play with her brother, the two of them racing down to the end of the turnout, often stopping at the far end to graze a while on tidbits of grass.

At a trot her lameness was at times almost invisible, but the soreness in her hock was definitely affecting her movement body, and at times the limp in her leg was very noticeable.

Dora’s canter lost its lateral aspect.  When she wanted to move fast, her hind legs would push off together in an awkward looking leaping movement, and she would move a few strides out in this choppy leaping before finding the canter sequence in her legs.

Realizing that Dora’s injury was more than a bruise, I asked advice of a veterinarian. He took ex-rays that revealed visual proof of damage in Dora’s hock. There had been an injury, although I can’t identify an event, and the evidence was a misshapen piece in the complicated hock joint.

The vet compared the condition with arthritis and said that with time and good luck the damaged bones would probably fuse and bring soundness back to our mare. How long would it take? No way to tell. Might happen, might not. Could be slow, could be quick.

At that time, late winter, we wanted to get Diego out of Tucson before the heat of summer arrived, and we ourselves were heading out to work in the eastern United States. We moved the horses out of Tucson to a place close to the transport highway, a little higher in elevation that Tucson, a little cooler.

I found the J-Six Ranch Equestrian Center on an internet listing of boarding facilities. It was located right next to the interstate, close to Benson, Arizona, (elevation over 3,500 ft.) and I hoped Diego would do well at that elevation. Dora just needed to rest, and she could rest anywhere.

I didn’t know the people, but the location was right.

A phone call told me there were stalls available, and a drive out to Benson clinched the deal in my mind. Walking from the parking lot to search out the barn owner, I passed several people on horseback, saw others walking horses, passed by some folks sitting near the tack room, and everyone offered a greeting: “Are you going to board here? Welcome!” “It’s a wonderful place.” “ Katherine is great.”

Katherine Calkins, the Wicked Good Horsewoman at J-Six Ranch and Equestrian Center, met me by her tack room door. Young, energetic,  gracious, she showed me the available stalls, explained her care and pricing, and agreed that Dora and Diego could board at her barn. Was it her pleasant and confident manner, or was it that she had Morgan horses in her personal string? Both, I think. I was convinced that the situation was safe for Dora and Diego.

Not many weeks later, our horses were at J-Six, and Michael and I were heading east on what would become a six month journey away from our southwest friends and companions.

In August, it was time to move Diego north. From a distance, arranging hauling with truckers I didn’t know, I found myself relying on the competence we had felt in Katherine Calkins. She was a great help to me as I called from distant places to ask questions and share tentative timetables and then final timetables, and when finally Diego arrived safely at Bakke Farm in Wisconsin, he came with an elegant braid in his tail and his own jaunty “what’s next?” attitude. I sent a word of thanks to Katherine, feeling growing confidence in the trainer at J-Six.

Roll back the tape: 1960, Cincinnati, Ohio, 3 am. My upstairs bedroom.  Headphones on, I’m squinting in the dark at the lighted dial of my Hallicrafter S-38e short wave radio, with a Q-multiplier attached that I built from a Heathkit. The S-38e was produced from 1957 to 1961, making it the end of the Hallicrafters S-38 line of shortwave… END_OF_DOCUMENT_TOKEN_TO_BE_REPLACED

I climbed down out of the Crow’s Nest and spent a recent Saturday afternoon worrying a pile of knotty red oak rounds with a maul and wedge, whittling them down to size for the wood stove. As I split them open, I enjoyed seeing the beautiful swirling grains in the wood, exposed to the sunlight… END_OF_DOCUMENT_TOKEN_TO_BE_REPLACED