You are here: Home / Music / Day is Done 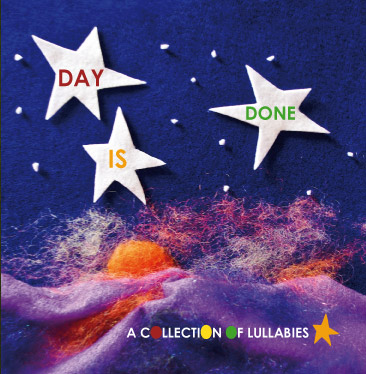 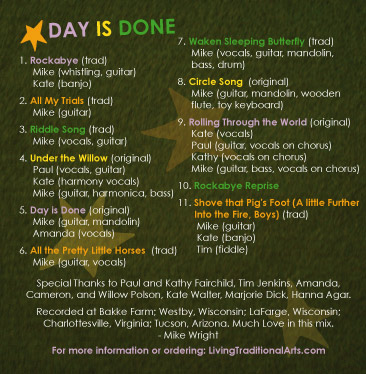 Two of the songs, “The Riddle Song” and “All the Pretty Little Horses”, were recorded in a classroom at Tucson Waldorf School late in the night as a baby was being born a couple of thousand miles east in Virginia, and I couldn’t think of anything else to do to calm myself down.

With that start, Kate and I packed up the instruments  a few weeks later,  and as we made our way cross country, east, north, east again, south, west, slowly worked up some songs and chose some of them we wanted to share.

Playing music with friends and family along the trail, new possibilities appeared. We set up a microphone in the front room of the house at Bakke Farm in Westby, Wisconsin, and for a couple of hot July weeks tried to find times to get together and play some tunes.  We played some songs more than a few times as I tried to figure out some pretty basic recording technology. Paul, Tim, and Kate remained jovial, and I had a great time playing with the possibilities of microphone placement and hanging up cloths from the attic on the walls to change the sound qualities. From a lot of songs and fiddle tunes, we chose a civil war song “Shove that Pig’s Foot A Little Further Into the Fire, Boys”, not a lullaby at all, but a rousing, joyful tune, you have to walk down to the barn at night to hear (baby’s sleeping).

If you don’t want to record copyrighted songs, you either use songs in the public domain—trads, or you write them yourself. The song “Under the Willow” surfaced in Westby at Paul and Kathy’s house. Paul was strumming a nice guitar piece that had occurred to him, and Kate heard some words and started writing them down. Kathy heard it and had a few ideas, and Kate kept writing.  We wanted to hear Paul sing this one so he did.  Writing that song was such a good time we thought we’d try it again and came up with “Rolling Through the World” with Kate writing the lyrics. I recorded Kate, Paul, and Kathy doing the song  in the living room, then recorded more tracks of guitars, bass, and vocals over the next weeks of travel.  This project was  slowly growing.

There is a beautiful wooden room near LaFarge, Wisconsin, where we have enjoyed some long magical nights of music and laughter.  What a perfect place to listen to crickets, watch the stars, and write some songs. “Day is Done” started as a mandolin melody that was repetitive and drowsy enough to qualify as a possible lullaby, and Kate’s images of a road heading toward dreamland where one might encounter characters like a dog, a cat, a gnome, an elephant, a butterfly, and various members of one’s own family, seemed to fit. The song traveled with us as we drove back to Virginia, and we were quite happy when Amanda agreed to put the vocal on it. With the refrigerator making unnecessary noises in the kitchen, I put the microphone in the bathroom and Amanda sang from the hallway.  You never know what you’re going to get until you try it.

Headed back west in August with a lot of miles behind us and a new school year coming fast, Kate and I looked for a coffee shop in El Paso to get us through the last passage to Tucson. Back on Pima Street through the fall, we took all the material we had and played around with it, trying some harmonies on the vocals, adding some instrumental tracks, listening to different mixes in the car since that was the working  cd player at the time. Finally, one has to stop doing that kind of thing and just finish something. So we did. Groovehouse Records in San Francisco one day in December duplicated the cds and printed the  cd wallet  Amanda designed, and a short time later a small box was dropped over our gate. Since we had such a great time putting it all together, we’re happy you have enjoyed  listening to it. Thanks again.

If you have not yet purchased a copy of Day is Done, or you would like to order additional copies, the cd is available in the Living Traditional Arts Shop for $15, shipping included.

Roll back the tape: 1960, Cincinnati, Ohio, 3 am. My upstairs bedroom.  Headphones on, I’m squinting in the dark at the lighted dial of my Hallicrafter S-38e short wave radio, with a Q-multiplier attached that I built from a Heathkit. The S-38e was produced from 1957 to 1961, making it the end of the Hallicrafters S-38 line of shortwave… END_OF_DOCUMENT_TOKEN_TO_BE_REPLACED

I climbed down out of the Crow’s Nest and spent a recent Saturday afternoon worrying a pile of knotty red oak rounds with a maul and wedge, whittling them down to size for the wood stove. As I split them open, I enjoyed seeing the beautiful swirling grains in the wood, exposed to the sunlight… END_OF_DOCUMENT_TOKEN_TO_BE_REPLACED