You are here: Home / Articles / Education / Who Speaks? Hans Pusch and Practicing the Spoken Word 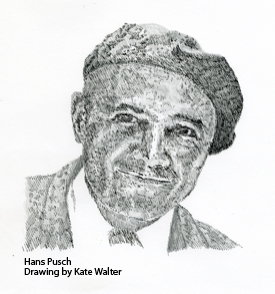 It has been my good fortune working with Waldorf Education to experience inspiration in classes devoted to artistic, pedagogic and therapeutic speech for teachers. I was a grateful student in those sessions, presented at various times by more than one excellent teacher who helped us with exercises in speaking, a fundamental classroom activity. Those speech exercises opened avenues of thought and practice that led me to better teaching and to an enriched understanding of what we do as people when we speak.

Speaking. Humans alone on earth speak, to themselves, to one another, to animals, to plants, to wind and the weather and to God, with words. How you speak helps define your path through life, and as an educator I have watched other learning capacities strengthen as students practiced exercises in speech.

Speech itself — did it begin as an art? Many arts come to us through tradition within the realm of speech. We have poetry and song, stories and sayings, words that can be written now and read but survived for many years being shared only through the spoken word.

What is the spoken word? And, another question: How can we understand and practice the art of speaking to help us articulate the strongest possible expression of the thoughts we wish to convey?

“He has grown together with its motion, rhythm and symbolism, because out of his own nature he responded to these forces. In the movement of his limbs, in his breath and pulse beats and in his imaginative thinking he felt akin to the powers of speech. The long process of blending and melting into each other has reached its culmination. It was man who brought speech to fruition. The complexity of his nature reflects itself in speech.”

Every field of study has masters who open inspiring avenues of thought and activity; modern teachers in Waldorf education work with the insights of Rudolf Steiner (1861 – 1924). Steiner developed a series of speech exercises, which he and his wife Marie Steiner shared with actors gathered in Dornach, Switzerland in the early twentieth century. It was through acting that speech work entered education in the Waldorf schools.

 Hans Pusch, one of those young artists working in Dornach with the Steiners, later carried the speech exercises with him when he emigrated to the United States. To meet the needs of English speakers, Pusch worked through many layers of linguistic complexity to transpose Steiner’s German exercises to English.

Hans Pusch was born on May 4, 1902 in Dessau, Germany, the youngest of three brothers. His father was a chemist, his mother a homemaker and artist.

At the age of 16, he had already begun to follow an interest in acting. He played in amateur productions of German classics, finding in every community through which he moved an outlet for his interest in theater and speech.

While in Dornach, Pusch participated in productions of Steiner’s Mystery Dramas,* playing first Theodosius and later Johannes. He also practiced gymnastics for actors and taught both gymnastics and speech courses.

Also offered at the Goetheanum was the study of Eurythmy, a movement practice suggested by Rudolf Steiner and developed by his wife Marie Steiner as part of their Anthroposophical educational an artistic work. Eurythmy has a close connection to sound and speech, and Hans Pusch’s dramatic course led him to Eurythmy, crossing paths with Ruth Barnett, an American studying eurythmy in Dornach. In 1932 the two were married, soon becoming the parents of two daughters.

Hans and Ruth Pusch fled with their family from the Second World War in 1939, emigrating from Europe to New York where they continued to pursue their interests in eurythmy, speech, acting and Anthroposophy. Hans was engaged in productions of Steiner’s Mystery Dramas and of Faust, by Johann Wolfgang von Goethe, and he continued in New York to interpret and develop what he had learned from Rudolf and Marie Steiner in Europe.

In the late 1940’s Pusch returned to Switzerland to perform the role of Johannes in ensemble productions. Back in the United States, he and Ruth moved with their children to Santa Barbara, California, where they joined a group of Anthroposophists actively engaged in theater, educational offerings and shared study. The Puschs studied and taught in that setting, deepening their understandings, ignited by Steiner, of the human being as a player in a cosmic production.

 In 1949 Hans Pusch participated in a celebration of the 200th birthday of Goethe, working with Faust presentations in the Santa Barbara Repertory Theater.

In 1956, after an interim in Mexico, Hans and Ruth Pusch returned to New York. Their active lives as teachers, eurythmists, and actors inspired all who met them and created a line of good will through the Waldorf movement that I can still feel whenever I investigate the work of Hans Pusch.

He was so inspiring, people tell me. So much fun, so engaging, so committed to excellence and compassion — engaging students in the United States with his continuation of the work the Steiners had begun in Europe. Hans and Ruth Pusch were both members of the Threefold retirement community in Spring Valley, New York.

In 1998 Speech artist and educator Kim Snyder-Vine visited the Pleasant Ridge Waldorf School in Viroqua, Wisconsin, where I taught. She brought with her a a small book, self published by Hans, a collection of Rudolf Seiner’s speech exercises transposed from German to English.

Hans Pusch was no longer living. His written work was out of print. And there was very little published material to enliven the study of Waldorf teachers between conferences and courses involving speech work. “We need to be working with this,” she told me. “We need more copies of this book.”

Roll back the tape: 1960, Cincinnati, Ohio, 3 am. My upstairs bedroom.  Headphones on, I’m squinting in the dark at the lighted dial of my Hallicrafter S-38e short wave radio, with a Q-multiplier attached that I built from a Heathkit. The S-38e was produced from 1957 to 1961, making it the end of the Hallicrafters S-38 line of shortwave… END_OF_DOCUMENT_TOKEN_TO_BE_REPLACED

I climbed down out of the Crow’s Nest and spent a recent Saturday afternoon worrying a pile of knotty red oak rounds with a maul and wedge, whittling them down to size for the wood stove. As I split them open, I enjoyed seeing the beautiful swirling grains in the wood, exposed to the sunlight… END_OF_DOCUMENT_TOKEN_TO_BE_REPLACED