I first saw this easel design when I was living and working in Toronto, Canada. Two different schools had several in storage and brought them out to display signs or art work in progress at festivals or at special classroom events. Neither school used them for individual easels in full classes – I’m thinking they are a bit bulky for storing twenty or thirty at the end of the day, but one of my colleagues at the Alan Howard Waldorf School offered me an easel that was a left-over from a middle school wood working project, and I gladly took it home. He and his class of teenagers had built a number of easels for sale at a fundraising event, and not all had sold.

I don’t believe I even asked who designed the easel – I just accepted it gratefully, because a good easel is an important support in a studio, and I knew this to be an easel that stood well.

I learned that the one given me  probably hadn’t sold because the hinges were placed just a bit off straight, but there is room in the design for slight error; the performance of the easel wasn’t seriously compromised. I kept the easel at home, in a closet, and pulled it out to support my canvases when I found time to paint. I liked the ease of set-up, and I liked the stability of four legs. I didn’t have a studio, I didn’t have an H-frame easel sitting waiting for my canvas, but I had the Four Leg Peg, and that was good.

Tri-pod easels had been my main support, and I always found adjusting the sliding crossbar mildly irritating. It took two hands, and it was seldom a smooth straight -forward process. With the four leg peg easel, I could hold a canvas in one hand and lower or bring up the pegs with the other, and the adjustment was made, fast and simple.

My next teaching position was in Arizona, and wouldn’t you know, the Tucson Waldorf School also had a number of the four leg peg easels in storage. Some were a bit wobbly, and I learned they were also student made. Then I learned that a beloved colleague at that school was Canadian and had brought the prototype across the border  to Tucson, and students had built a set.  At school, I used one of the easels now and then, but it was at home that my appreciation for the design grew.

I claimed a room in our house for a studio, and I kept two tripods and the four leg peg all at hand. It was the four leg peg that became my mainstay. It was just so easy to use, easy to move around, easy to set aside. No wing nuts, no sticky cross bar, no tippy third leg.

And the design was so simple. I could see why several of my colleagues had made these easels with their students. Four legs, a couple of cross bars, a few holes and two pegs. Who couldn’t do that? I admired it, and then I modified it slightly, adding a companion strip of wood for supporting narrow canvases. And I got to thinking I should make one, copy out the plans and see if other artists and schools might find this a useful working easel.

So I determined to make one. I took the determination on the road with me to Virginia, where I bought the materials and hoped to assemble an easel to leave there with Amanda Polson.

Things got busy in Virginia, time came for us to move on, and the easel wasn’t built. I carried the project and my determination and the lumber and hinges to Wisconsin, where I set the parts out on the farmhouse studio floor and walked past them every day thinking about where I could set up a production table.

Our neighbor, friend and carpenter Bruce Bland, happened to be at Bakke Farm the day I began to gather tools and went looking for our hand drill.

“Why don’t you come to my shop?” he asked. “I’ll help you put the easel together there.”

Aha! A perfect offer! Bruce already had a worktable set up, and, his shop has a drill press. Although my plan had been to show how simple it is to build this easel in the home studio, the use of a drill press was just too elegant an opportunity to pass up.

We laid out the legs and marked the peg holes. 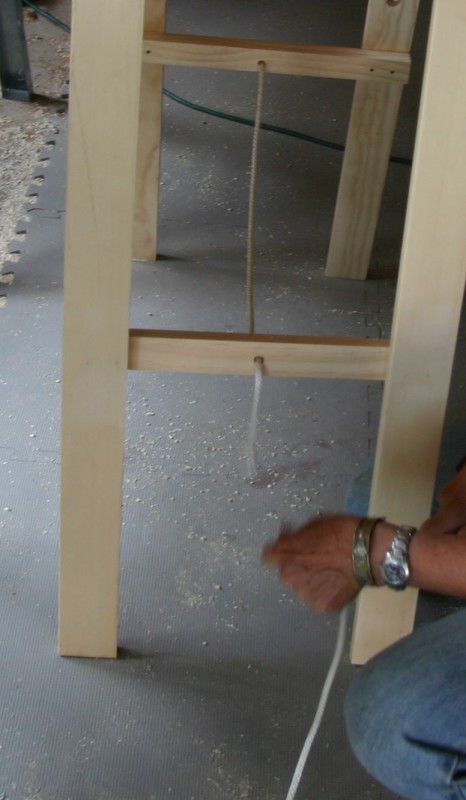 We drilled a hole in the center of the front and back lower cross braces. I put the rope through the holes and tied a knot at each end.

No champagne, but we had mighty scissors to cut the peg cord, the final step in the project. The four leg peg easel stands ready to set to work.

I climbed down out of the Crow’s Nest and spent a recent Saturday afternoon worrying a pile of knotty red oak rounds with a maul and wedge, whittling them down to size for the wood stove. As I split them open, I enjoyed seeing the beautiful swirling grains in the wood, exposed to the sunlight… END_OF_DOCUMENT_TOKEN_TO_BE_REPLACED

Each morning on the way to the barn we walk under the hanging limbs of the great beech tree that stands by the corner of our house. Names and dates carved long ago on the smooth, gray trunk are dark and distorted, barely legible. The tremendous number of beechnuts that grow on a tree this… END_OF_DOCUMENT_TOKEN_TO_BE_REPLACED