Being a food explorer in the southwest can be a demanding job, and on Saturday, November 9, there was more than one community festival calling us. Leaving Las Milpitas de Cottonwood, we headed north, traveling a couple miles to reach the party at the Mission Garden to celebrate the November issue of Edible Baja.

Published by Douglas Biggers of Coyote Talking, a Tucson multi-media company, Edible Baja is one of more than 80 publications in the U.S. and Canada that celebrate local food, diversity and sustainability as part of the Edible magazine community.

The magazine launched in June 2013, and response proved the time was right. “We’re here to stay!” an enthusiastic associate publisher Jared McKinley said at the party celebrating the November issue.  He added that there is so much happening regionally with good food and agriculture that the editorial group has no problem finding material; the main challenge is deciding what not to publish in each issue.

With food trucks, beer and wine vendors, and music by Salvador Duran & Friends, the party was going strong when we arrived.  Met at the gate by historian Diana Hadley, an energetic member of Friends of Tucson’s Birthplace, we were reminded that there was more here to celebrate than just the new magazine. The Mission Garden itself stands as an amazing tribute to the past and to the future, thanks to the committed work of those in the present who understand the importance of gardens in the history of Tucson. 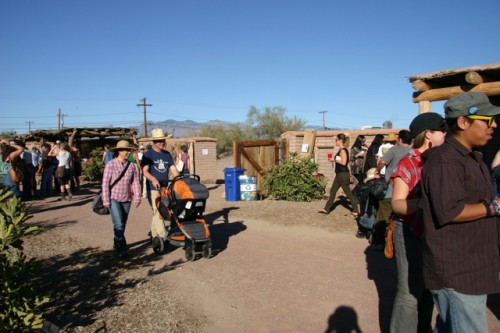 On the edge of a residential community west of downtown Tucson, the Mission Garden is sheltered with adobe walls that protect not only the plants growing inside but also the connection one has to history when standing inside those walls.

The garden is a a re-creation of the Spanish Colonial walled garden that was  part of the 1692 San Agustin Mission, and the re-creation occupies the old mission garden site.   Between the river and the Tucson Mountains’ Sentinel Peak, this land has been farmed for thousands of years.  Standing inside the walls, seeing the heirloom plants thriving in plots laid out to match historians’ understanding of the original garden plan, we felt an immediate connection to the past, as well as inspiration regarding the possibiliities of growing food in the desert.

The Mission Garden is a cooperative project, held strongly in the hearts of a group of neighbors who organized as Friends of Tucson’s Birthplace to protect their neighborhood from neglect and from unrestrained development.  Their mission, they wrote, “is to preserve, honor, protect, restore and promote the cultural heritage of Tucson’s birthplace at the foot of Sentinel Peak (“A” Mountain).”

Establishing these gardens with heirloom trees and garden plants, the Mission Garden supporters include Native Seeds/SEARCH , an organization that has worked almost thirty years to help preserve the seeds native to the Southwest, and the Tucson Cactus and Succulent Society, a group that first organized in the 1960’s to study and promote the welfare of cactus.  Together, civic and government groups have cooperated to build not only a desert oasis but also a living museum dedicated to the future.

Mission Garden is a living agricultural museum of Sonoran Desert-adapted heritage fruit-trees, traditional local heirloom crops and edible native plants. We are a non-profit volunteer-based educational organization and our primary mission is to preserve, transmit and revive the region’s rich agricultural heritage by growing a series of garden plots that are representative of the more than 4000 years of continuous cultivation in the Tucson Basin.”
—Friends of Tucson’s Birthplace

Roll back the tape: 1960, Cincinnati, Ohio, 3 am. My upstairs bedroom.  Headphones on, I’m squinting in the dark at the lighted dial of my Hallicrafter S-38e short wave radio, with a Q-multiplier attached that I built from a Heathkit. The S-38e was produced from 1957 to 1961, making it the end of the Hallicrafters S-38 line of shortwave… END_OF_DOCUMENT_TOKEN_TO_BE_REPLACED

I climbed down out of the Crow’s Nest and spent a recent Saturday afternoon worrying a pile of knotty red oak rounds with a maul and wedge, whittling them down to size for the wood stove. As I split them open, I enjoyed seeing the beautiful swirling grains in the wood, exposed to the sunlight… END_OF_DOCUMENT_TOKEN_TO_BE_REPLACED