You are here: Home / Articles / Art / A Glance into the World of Gourds

My interest in gourds began when I was introduced to the axatse, a rhythm instrument used in West African drumming ensembles. The axatse is a dried gourd that has been emptied of its seeds and covered in netting with small shells attached. When the gourd is shaken, the shells rattle and make a loud percussive sound, contributing to the varied intonations provided by the other instruments in the musical group, such as djembes, dundun drums, and the gankoqui bell. I discovered that there are many ways to play the axatse to create interesting and varied textures of sound. Once I saw one, I had to play it. A door was opened into the world of gourds!

Gourds belong to the plant genus Cucurbita, which also includes squashes, pumpkins, and zucchinis, all familiar in my life. I had seen gourd birdhouses and decorative gourds. Discovering gourds as musical instruments delighted me.

One evening at the Trane, a musical nightspot in Toronto, my friend Waleed in performance placed seven round gourds of various sizes, dried and cut in half, in a large basin of water. As they floated, round side up, he tapped them with rubber mallets to produce a most beautiful marimba-like sound. Another piece of an emerging picture for me.

In 1990, Boubacar Traore released Mariama, the first of many albums that contained elements of American blues with middle eastern and pentatonic scales fused with the rhythms and tonal landscapes of his native Mali. The percussionist on many of his songs uses a large gourd, also called a calabash, to produce a steady rhythm with rings on his fingers to tap the sides and his fist to thump on the top.

Moving from percussion to tone, I next met resonance. An acquaintance came by my house with a truckload of gourds and an instrument he had made. He had cut a large round gourd in half, and tightly stretched a thin skin across it. Then he attached a finely carved wooden neck with steel strings to create a gourd banjo. Pleased so by the sound,  I was off on another quest to learn about  instruments in the world that use gourds as resonator bodies for stringed instruments. They make a multitude of lively, earthy sounds. 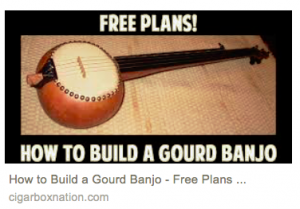 Gourds are also used as resonators on the balafon. Various sizes of dried gourds with tops removed are suspended beneath the wooden keys of the instrument to amplify the tones produced when the keys are struck with rubber tipped mallets. One of the many projects awaiting me is reconstruction of a seventeen- key balafon that I disassembled for safety-in-transit in my move to Virginia. Hanging the small gourds by strings beneath the keys is a complex task that will, no doubt, challenge my patience and ingenuity.

Gourds have been and continue to be used by indigenous peoples all over the world for music in dance and ceremonial rituals. They are also used for storage and carrying, water jugs, dippers, spoons, dishes, masks, and much more. According to a Wikipedia article, “The koteka, horim, or penis gourd is a penis sheath traditionally worn by native male inhabitants of some (mainly highland) ethnic groups in New Guinea to cover their genitals. They are normally made from a dried-out gourd , Lagenaria siceraria , although other species, such as Nepenthes mirabilis, are also used.”

It happened that some gourd seeds and a place to plant them materialized here in Virginia. The red clay soil seemed to suit just fine and the vines took over the entire southwest corner of the garden. By October, there were gourds hiding under the leaves and blowing in the breeze where they hung on the fence, mingling with the pokeweed where the vines had climbed. The question arose, “Now what?”

Research led me to many opinions about how to preserve gourds, a process called curing. I learned that Ornamental gourds can be picked as soon as their stems turn brown and tendrils next to them are dry. I began to wonder if I had planted my gourds early enough; they looked pretty green and the stems weren’t very brown. I held off harvesting them for another month, when the frosts started coming, then clipped them off the vines and loaded them into the wheelbarrow.

According to some sources, gourds should be washed with soap and water and rubbed with alcohol; others disagree with this method. I washed the gourds with water alone and laid them out on the basement floor, making sure none were touching. It’s best if gourds are left to dry in a well-ventilated space for six months. The basement was the best I had.

I checked in on my harvest from time to time. I was interested to see that the gourds had not softened, a sign of rot from the inside, or otherwise deteriorated. However, they had turned to many shades of brown and black, coloration which I attributed to mold. Was this a problem? I was encouraged by an article I read called Curing Amish Gourds. It stated, “Curing gourds quite often get a mold on the outside of their skins. It’s just a part of the drying process and shows that some of the moisture is coming out through the skin. No need to try and wipe it off, it will just return.” So I left the gourds alone and continued to watch.

Until the other day. Six months curing time had turned into two years. As I was Returning some tools to the workshop and thinking about the need to do some organizing down there, my gaze fell upon the gourds which had moved to a small heap against the wall. It seemed that I had a spare moment, so I chose one of the gourds and took it to the washtub. I scrubbed the gourd with a cloth under warm water and a little soap, and the gourd began to reveal its true colors! Splashes of russet, tan, auburn, bronze, red, and black appeared, with fanciful images veiled within the patterns. Intrigued, I began to work my way through the pile, surprised each time by the unique glowing beauty each gourd exhibited.

The genus Curcurbita covers a wide range of plants, indeed. The edible species provide an abundance of flavors and textures that appeal to the palette. The soft varieties like the luffa make great sponges. The hard shells of the gourd species have found their uses in myriad ways around the world. It is an interesting thread I can trace when I think about the many ways I have interacted with this vegetable family, from acorn squash to pumpkins pies, luffa sponges and giant zucchinis to bird houses, musical instruments, or artistic pieces. The gourds I grew will probably not become musical instruments; in fact, as I think about it, I am not sure what I will do with them, other than appreciate their beauty.

As I contemplate these mysterious objects from the plant world, I am struck by their resilience. Their curing had been haphazard, their storage careless, yet they persisted as their beauty lay hidden, or perhaps increasing, waiting to be discovered. 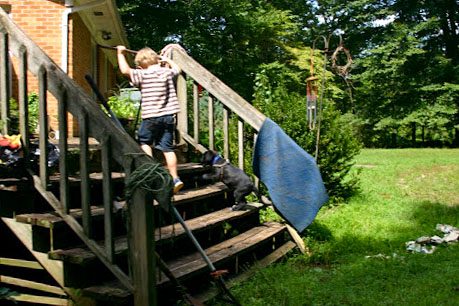 I don’t know what you did during the pandemic, but we got a puppy.      Answering an ad in the local paper, we got her from a farm family in the Shenandoah Valley. All ten puppies in the litter got farm names, the girls: flowers, the boys: tractors. We chose a girl, the best looking of… END_OF_DOCUMENT_TOKEN_TO_BE_REPLACED

Teaching first grade at the Waldorf school, I visited with dragons and elves, fairies, giants, gnomes, and all the mythical creatures that our ancestors in the very early days described in stories they told one another. The Waldorf curriculum framework was designed to support children as they retrace the human journey into literacy. Fairy tales,… END_OF_DOCUMENT_TOKEN_TO_BE_REPLACED 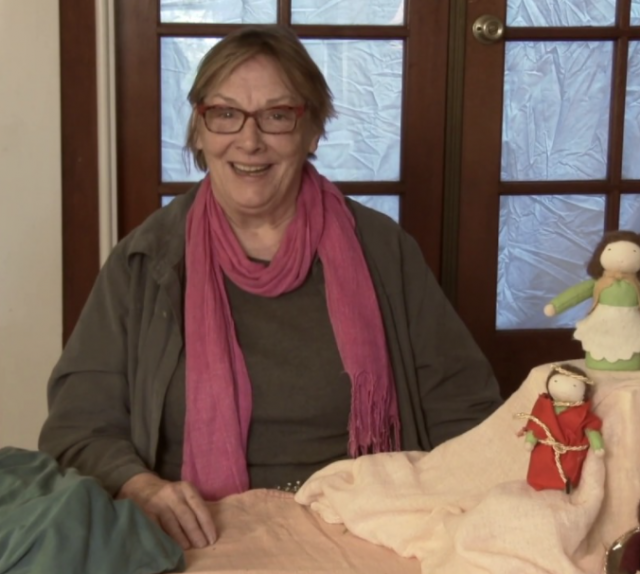 Once upon a time it happened, when indeed did it not happen, a teacher telling a fairy tale to a class at school was deeply touched by the power of the story. She saw it in the eyes of the children, and she felt it in her own heart. That experience awakened her interest in… END_OF_DOCUMENT_TOKEN_TO_BE_REPLACED

More Posts from this Category